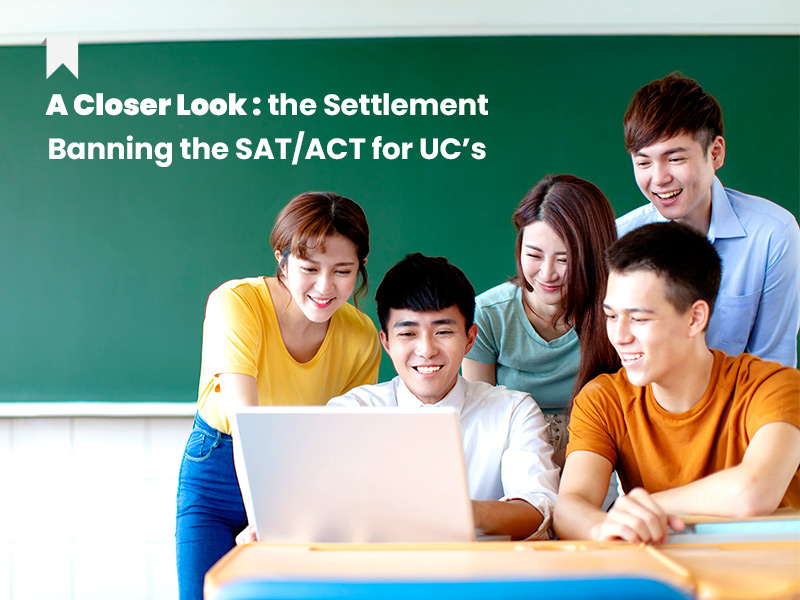 A Closer Look: the Settlement Banning the SAT/ACT for UC’s

Earlier this month (May 2021), the University of California reached a settlement that prohibits its use of the SAT and ACT scores when evaluating students for admission. Let’s take a closer look at the terms, and what this means for high schoolers both now and later.

While the settlement bans the UC’s from using the SAT and ACT, the ban ends after Spring 2025.

For students applying for entry between Fall 2021 and Spring 2025, no University of California (“UC”) campus will consider SAT or ACT scores in determining whether to offer admission. SAT and ACT scores, if submitted by students, will not be provided to admissions readers

In other words, this isn’t a permaban, and it makes sense. What spawned the ban in the first place were complaints that students with disabilities did not have equal opportunity or access to take the exam during Covid. Hence, at Covid’s conclusion, which the settlement assumes will likely be in 2025, test taking access will return to normal, theoretically providing all students with equal access once again.

While the College Board announced it will be discontinuing Subject Tests after June 2021, students who have taken them already can still report them on the UC Application. In other words, Subject Test scores may still be used in UC admissions, as they are not included in the settlement ban. Term 1a.iv states specifically:

Nothing in this Agreement prevents the REGENTS from considering scores on SAT Subject Tests in admissions or scholarship decisions if students choose to submit them.

This seems to contradict the premise of the “unequal access” argument, since students with disabilities had a hard time gaining access to both the SAT and SAT Subject Tests, so why the ban applies only to SAT’s and not Subject Tests is strange. Nevertheless, take it as an opportunity to report a strong Subject Test score if you have one, usually in the 700’s to be considered strong (refer to the score distributions.

The Possibility of a New Test

While it’s a long shot for UC Regents to develop its own version of an SAT or ACT, the settlement keeps this door open. Term 1e states:

If the REGENTS chooses a new exam for use in undergraduate admissions in the future, it will consider access for students with disabilities in the design and implementation of any such exam.

In fact, the UC system can simply choose a different exam, either one that already exists or one that has yet to be developed. In other words, just because the SAT and ACT have been banned through Spring 2025, doesn’t mean that the UC system can’t implement another similar test. The College Board, for example, already owns another test called the Accuplacer, which can be adapted for this purpose, and there’s always tests like the GMAT and other examinations of aptitude that can substitute for the SAT and ACT.

While UC’s are banned from using the SAT and ACT through Spring 2025, standardized testing is still very much alive. UC’s have already hinted at developing its own test, and if not, they can simply adopt a different test that’s similar to the SAT anyway. For now, however, students would be wisest to focus on GPA and AP exams, since the numbers weightage now falls entirely here for those applying to the UC’s.

We specialize in youth mentorship and college counseling. From 8th grade to 12th, we have you covered for any stage in your high school career. Schedule a free consultation with us here.